My First Working Week in Bali 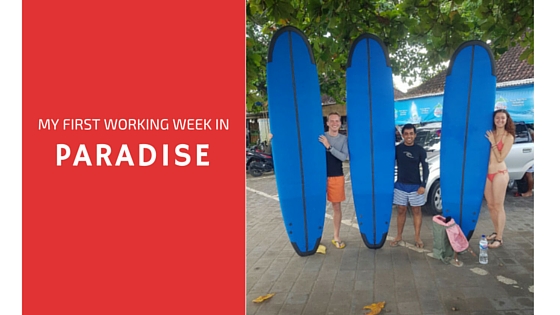 I’ve just finished my first week in Bali, where I’m based for the next two months interning with a startup and getting mentoring to work on my own startup idea, but more about that later. The single most eye-opening part of being at Hubud, the coworking space where I’ve been working from, and living in Bali is meeting the huge array of extraordinary people here. I was told this before I arrived but it sounded like a cliché at the time so I was pleasantly surprised to find out that it really was the case. In my short time here, I’ve met and befriended writers, entrepreneurs, web developers, e-commerce gurus, marketers, journalists, PR specialists , the list goes on. As you’d expect with such interesting people there are some amazing businesses being developed. To name just a few; Paul, CTO of a startup called Movie English is decoding YouTube clips of well-known movie clips to help people learn English; Lydia, founder of Screw the Cubicle helps unsatisfied professionals escape their office lives; Dan is writing a book on his time heading up a Russian TV station. Being around these kinds of people with such a variety of businesses and career paths is truly inspirational and does show there is more to life than just a boring old graduate scheme at KPMG.

Running a business from your laptop

A lot of startup founders in Bali manage the whole operation from their laptop, which allows them to live and work anywhere with an internet connection. Entrepreneurs and freelancers here use a mix of different hardware and software which they then adapt for their work needs. How much you learn is really a case of how much effort you put in. And you learn a lot here. Partly because everyone is more than happy to impart their knowledge to others, despite the fact that many of them are busy with multiple projects. Lydia (from Screw the Cubicle) gave me a great breakdown of her favorite tools to stay organized. These included: Evernote, a cloud-based note-taking software; WordPress, the most common way of creating a website or writing a blog; ConvertKit, a useful tool for email automation; and Thrive Themes, a neat way of implementing new designs into WordPress for marketing. Since I’ve been here I’ve also been teamed with a mentor James, an accomplished developer, who gave me a good overview of web development and creating an MVP (minimum viable product) while also giving me an insight into his own experience with venture capitalists and running multiple tech startups. It’s not just a case of learning new skills but also hearing about people’s remarkable experiences. Another Hubud member had stories of her time as a paralegal working to prosecute suspected terrorists in Baghdad, Iraq. I also met a former high-flying doctor from Canada, who consults for patients back in North America while living in Bali.

To say the first week has been action packed is an understatement. Immediately after getting off the plane after a 20-hour journey I headed straight to the bar to meet a handful of people and catch the last part of Federer’s defeat at Wimbledon. The next morning (still jetlagged), we drove to Canguu for an intense three-hour surfing lesson. After battling the waves, and picking it back up fairly quickly, I was riding the waves like a pro (sort of), we were then enrolled in a four-hour introduction to coding. Seeing as most people in Bali have tech-focused startups, getting an introduction to HTML, CSS and Javascript was valuable for future techie conversations. Then it was back to Ubud, we joined a birthday celebration and a night out afterwards. So all in all, a big first day. Sunday involved a trip to Komune – the closest beach to Ubud at 45 minutes away by car. The beach was amazing and the black sand was a new spectacle for me. Followed by a great meal in the local Padang (a traditional buffet of Indonesian food), the jet lag finally hit me. Other activities have included trips to a swimming pool in the middle of the jungle with a traditional Balinese fire ritual, an introduction to yoga, numerous types of cuisine which Ubud is famous for and also the monthly Invasion party hosted by Vitto, Hubud’s ever-affable events manager Returning to university after that experience, I see all the same flyers, emails and talks about graduate jobs and postgraduate study opportunities as before. But this time, it’s different because I now know that the corporate life is not the only option.

Of course, there has to be some work in between the fun. I am working a two-month internship with a British startup founder for a startup which is expanding very quickly and fills an interesting niche in the graduate job market. My role so far has involved re-designing the startup’s website’s leadpages with the new Thrive Themes extension; for this I’ve had a crash course in web design, marketing and methods for bootstrapping a startup at minimal cost. I have had input in the strategic decisions for scaling and have been involved in discussions for new additions to the program such as the new Startup Experience Programme. I am now working on redesigning the full marketing process. As you can probably see at a startup there a lot of things that you can get your teeth into from marketing to development to strategy.

Working on my own startup idea

Another great thing about Hubud is the attitude towards new ideas. At home you may feel like you’re boring people when you discuss your latest business idea, however, at Hubud (and Bali in general) these discussions are commonplace (and encouraged). I have an idea that I’ve been working on for the last few months and am now able to make positive progress with it. I’ve already pivoted the idea and am now re-wireframing the idea before going to a Hubud-based think tank to get more feedback. There is so much help available, from developers to writers who can help frame your idea and bring out the positives and more importantly the criticisms which can then be worked on and strengthened. Stay tuned for more updates on my startup idea as it develops.