The Psychology of the Student Sheep Phenomenon 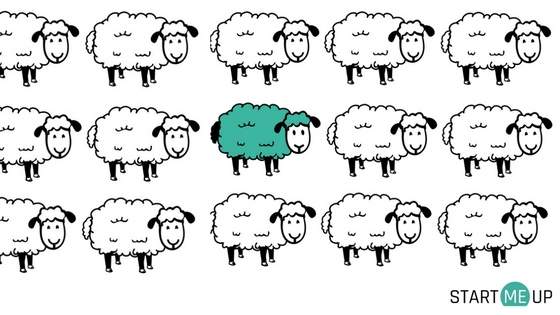 When I was at university, I felt limited by my career options. I was supposedly getting a fantastic education that would enable me to do anything. And yet, I felt like there were actually only a few options out there for me.

They say you are the average of the people you surround yourself with. Well, I was surrounded, in the words of US academic William Deresiewicz, by excellent sheep.

We devoured books and churned out essays, we were learning to be critical of our subject matter, but we showed a striking lack of originality when it came to our careers. We were petrified of making the wrong decision, so we all ended up doing really similar things.

And it’s the same at many of the world’s top universities. Among members of Harvard’s class of 2013 who secured jobs before graduation, 16% went into consulting and 15% into finance, making those the most popular industries for Harvard gradates.

Deresiewicz thinks this is symptomatic of a system that has “rarely asked them [students] to think about something bigger than the next assignment.”

“The system manufactures students who are smart and talented and driven, yes, but also anxious, timid, and lost, with little intellectual curiosity and a stunted sense of purpose: trapped in a bubble of privilege, heading meekly in the same direction, great at what they’re doing but with no idea why they’re doing it,” he writes.

So why do so many graduates end up doing the same thing?

Think about it, your whole life in institutional education has been about getting from A to B as quickly as possible. Previously you only had to worry about which university to go to, or what subject to study. Then suddenly on graduating, the whole world is there. And there are simply too many choices (and so many options that you can’t possibly know about).

Most people follow the brand. They try to get into the best university they possibly can. And they think that the more competitive and prestigious sounding the opportunity, the better.

Sometimes, just working for a household name is enough. It doesn’t matter what you actually do on a day to day basis. It’s a foot in the door, people will say. But not everyone who starts in the sorting office of a gigantic company can end up being CEO. The chances are, you won’t.

If you’re curious about alternatives

While at university you tend to only hear about the big companies on campus. Because smaller companies don’t have the resources to spend on recruiting. The problem with this is that it starts to feel like your destiny is already determined.

Of course, if you want to do those jobs this is all fine, but what if you’re curious about alternatives?

Smaller companies don’t always advertise positions. A startup, for example, might not hire for a certain position, but be looking for a well-rounded individual, who can do many different things.

Moreover, a startup may not even have time to post a job advert and then process a deluge of applications. But that doesn’t mean they don’t want or need help.

There has probably never been a better time to make speculative applications to companies that you think are doing cool stuff. Many busy startups don’t have time to spend recruiting people and they appreciate people having the resourcefulness to get in touch and offer their ideas and feedback.

So how can you get inspired about different options for you?

One way is to go and do something completely different. There are so many events going on at university, but seek out the smaller ones, or go to startup events in your city. Entrepreneur events can be good but beware, they can get repetitive.

Here’s a thing. Most people love giving advice. And many people who are further along with their careers want to help those further down the ladder. So seek out mentors. Engage with people you admire.

This doesn’t mean approaching every high flyer you meet asking them to be your mentor, but working to build relationships with people older than you and asking their views.

Leaving my immediate peer group and going to live in a completely new place was an amazing way for me to develop my perspectives.

There were skills I’d had for ages that I didn’t really prize. Being amongst a diverse group of people helped me realize the value of them. It also helped me realize many of the ways in which I was lacking. And gave me the space to work on them.

Find people who are doing cool stuff (and approach them)

I’m always impressed when people email me with feedback.Search for startups on Angel List or bloggers on Medium. Offer to help them.

Curious about having an alternative internship experience overseas?